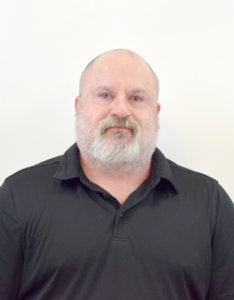 Hailing from Salmon, Idaho, Hauff is accustomed to small-town life. His mom was mayor of the rural community. Coincidentally, she was also the first female mayor in the state. His dad worked for the Forest Service as a Salmon National Forest supervisor.

Hauff originally considered a career in forestry, but decided to pursue a path in healthcare when he was in the military.

He began his military service in 1987, becoming Army infantry. His first assignment was to provide border control along the wall that separated Communist East from Democratic West Germany.

“It was such a contrast,” he said, explaining that West Germany was a picturesque European region with castles, colorful buildings, and well-kept lawns (think of The Sound of Music), while East Germany was home to gray industrial buildings and bare ground without landscaping.

“And then the wall came down, and this stream of East Germans came flooding in with their little, tiny cars and suitcases about 10 feet high with duct tape strapped to the top,” Hauff said. “A lot of people assumed that West Germany hated the migration. However, they welcomed the crumbling of that border. Many families were separated when it was constructed. They hated the wall.”

After the wall came down, Hauff returned to the United States and began his medical career. He became a civilian emergency medical technician (EMT) in 1991, taking night classes. He was delayed for a bit due to the first Gulf War, but started college that summer, thinking it would be his final year in the Army.

Next, Hauff joined the National Guard and became a combat medic. After transferring to Boise State University, he was offered the opportunity to become a licensed practical nurse (LPN). During the summers, Hauff taught the combat medic course in California.

He continued his education at Lewis–Clark State College in Lewiston, Idaho and was selected for an experimental accelerated program, taking between 22 and 24 credits a semester without any breaks. He was also working 12-hour night shifts at a long-term care facility.

After two years in the accelerated program (instead of the usual four), Hauff graduated with a Bachelor of Science in Nursing (BSN) degree and got a job at Saint Alphonsus in Boise, Idaho, working 12-hour night shifts in orthopedic and medical-surgical nursing. He also worked in home health in Mountain Home, Idaho as the medical director.

About a year later, Hauff considered rejoining the active-duty Army. However, the Air Force ended up being a better fit for his skillset. He relocated to Dayton, Ohio where he worked on a multiservice unit, providing medical-surgical, telemetry, and the occasional chemotherapy. After making captain and working four years of 12-hour night shifts, he was sent back to Idaho to work nights at Mountain Home Air Force Base.

Since he earned his medical-surgical certification, Hauff was originally under the impression that he would be doing medical-surgical nursing in Mountain Home. However, when he arrived, he was told that they needed a labor and delivery (L&D) nurse with float to the emergency room.

“I just started laughing, thinking it was a new-person joke, but the look on my commander’s face told me that they were serious,” Hauff recalled.

When he tried to explain that he wasn’t certified as an L&D nurse, Hauff was told that was about to change. He was dispatched to Virginia for about six months to get certified and then returned to Mountain Home to work in the maternity ward.

“Anyone who works in a small hospital knows that you are also the nursery nurse and C-Section nurse,” Hauff said. “I ended up just falling in love with it,” he added. “It was a wonderful experience.”

When Hauff had children of his own, his wife, Nicole, complimented his swaddling skills, referring to their carefully wrapped kids as “baby burritos.”

After about three years in Mountain Home, Hauff was reassigned to the Sacramento, Calif. area, where he was the nurse manager of an outpatient clinic.

Two years later, he was accepted into Uniformed Services University of the Health Sciences in Bethesda, Md.

“Basically, it’s the military’s medical school,” Hauff explained, adding that medical students from all service branches are educated there.

Hauff earned his master’s degree and became a family nurse practitioner (FNP). FNPs are advanced-practice registered nurses who work independently or in collaboration with other healthcare professionals to deliver family-focused care. Much like physicians, FNPs can prescribe medication, examine patients, diagnose illnesses, and provide treatment.

After earning his degree, Hauff went to Cheyenne, Wyo. where he served as a primary care provider for retirees, active-duty service members, and their families.

Four years later, Hauff retired from the military with a total of 26 years of service under his belt. He served during, and sometimes in, the Cold War, Gulf War, and Operation Enduring Freedom.

Hauff’s first civilian job as an FNP was at a walk-in clinic in La Grande. Unfortunately, working all weekends and holidays wasn’t ideal for the father of four, so he took a job at an urgent-care clinic in Eugene. His wife and kids continued to live in La Grande, so Hauff had to commute back and forth.

Hauff noted that working in the urgent-care clinic was a great experience that expanded his skills, but the 12-hour shifts and lengthy commute agitated his neck and back pain and cut into his family time.

He worked briefly at a slower-paced clinic for school-district employees, but his medical condition worsened, and back surgery became inevitable.

After undergoing two surgeries and addressing some follow-up issues, Hauff was ready to immerse himself into his work again, and he started looking for opportunities in small communities.

“That was kind of a dream of mine, to be that small-town provider where you know everybody,” Hauff said, explaining that he likes to build relationships with his patients and take his time with them. “Let’s say you come in for a headache, and you’re also worried about ‘this.’ I’m going to look at the ‘this,’” he said. “If you’re in to see me, and it’s within my scope of practice, I’m going to do everything I can before sending you to a specialist.”

Everything seemed to fall into place when Hauff received a postcard advertising employment opportunities at HDH. After years of moving from place-to-place (10 moves in all) for his military service, Hauff and his family are ready to settle down and make Harney County their home.

“We eventually want to buy some land, maybe even build a house. We’ve always wanted that place where kids and grandkids can come back to,” he said.

Hauff’s younger children, Rowan (14) and Thor (12), are looking forward to attending the local schools. His daughter, Briannah (21), lives, works, and takes classes in Boise, and his daughter, Ally (18), will complete her high school education at home this year.

In his spare time, Hauff enjoys hunting, fishing, golfing, and playing tennis and racquetball. He also enjoys spending time with his family, two German shepherds (Odin and Ella), and his wife’s Chihuahua (Theo) who he lovingly refers to as a “tall rat.”